Revisiting The Theater of Needless Talents 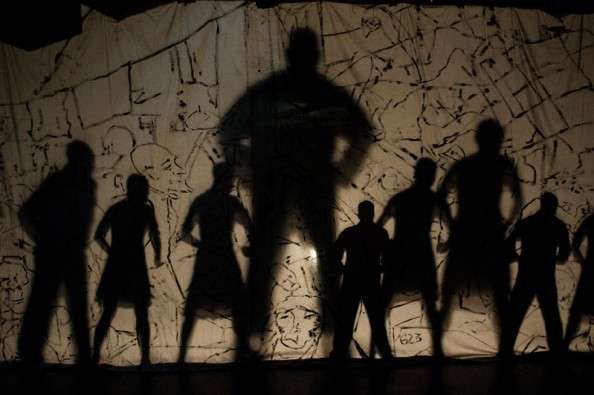 Last year this time I was deep in preparation for the revival of The Beast. It was during pre-production of that piece that I arrived at the strategy of approaching revivals of my work as a director rather than as ‘the author’ or choreographer. Rather than ‘rewrite’ the earlier work, I decided I would take the ‘text’ of the work (the movement) as it was written, create new frames or other ways to see moments of the movement, and make theatrical choices that enhanced clarity and meaning of the work. While I have tweaked a few steps here and there and made a few movement rewrites, for the current revival the choreography of The Theater of Needless Talents is pretty much as it was originally seen back in 2008.

For this revival, I have worked to smooth out the moments that felt awkward to me in the past. In addition I have created theatrical ‘enhancements’ and punctuations that help clarify meaning and intention. For example: a black-out of the lighting; a follow-spot for some moments; slowing down or speeding up of transitions; over-lapping moments; and pushing the pacing here and there. But I have also looked at what the piece really is and not necessary what I hoped it would be when we created it. This has been the primary guiding principal to my directorial choices.

The Theater of Needless Talents is a response to The Holocaust. It is not about The Holocaust. The piece asks us to consider The Holocaust not only as a profound Jewish tragedy but also as an atrocity perpetrated against humanity. It was not only a brutal assault intended to annihilate the Jews of Europe but also was the systematic murder of millions of people in other groups as well, including Romanian, Polish and Soviet civilians, homosexuals, people with disabilities, communists, Soviet prisoners of war, Jehovah’s Witnesses and other political and religious opponents.

At its most inquisitive, The Theater of Needless Talents wonders about the creative life of artists imprisoned in Nazi concentration, transit, and death camps, as well as ghettos. In particular it seeks to shed some light on the nature of performances in the camps, and why in the face of imminent and probable death these people still chose to create and perform. Were these performances moments of respite from the horrors that surrounded them, an instance to lose themselves in the euphoria of performance, or morale boosting actions, or even acts of defiance? Or were they staged as just another insidious act of terror perpetrated on the prisoners by the SS to further humiliate and dehumanize? Perhaps performance in the camps was a complicated and potentially deadly mixture of all those possibilities.

The Theater of Needless Talents asks us to consider the extraordinary musical talent of Erwin Schulhoff, unique and daring, in all its uncompromising and resonant beauty. Schulhoff was a Czech Jew of German origins who loved jazz music, who went out dancing almost every night, and was one of the first European classical composers to significantly integrate African-American musical thought into his compositions. A man whose gifts as a composer and virtuoso pianist were monumental, but whose place in the pantheon of 20th Century European classical greats is conspicuously absent. It is through the contemplation of this absence of ‘one’, multiplied by the millions lost during this horrible chapter of human history, that perhaps we can begin to grasp the tragedy of The Holocaust and its devastating impact on us today.

Finally, The Theater of Needless Talents asks us to wonder that even sixty-five years after The Holocaust, when the world asserted, “never again”, genocide still persists. Though we might recall with horror that not more than 20 years ago the murder of 8,000 Bosnian Muslim men and boys during the Srebrenica massacre in Bosnia and Herzegovina, and the ruthless and brutal murders of approximately 800,000 Tutsis in Rwanda; less than 10 years ago the slaughter of thousands of Mbuti pygmies in the Democratic Republic of the Congo; and today, right now, while we might be shocked, horrified, and dismayed by the daily news that tells us of the ongoing alleged genocides in Darfur, Iraq, Pakistan and Bangladesh, these crimes against humanity continue. Why? Perhaps an answer can be found in a statement President Obama made back in April 2012 at the Holocaust Memorial Museum in Washington, D.C.: “Because remembrance without resolve is a hollow gesture. Awareness without action changes nothing. In this sense, ‘never again’ is a challenge to us all — to pause and to look within.” The Theater of Needless Talents asks that during its 75-minute duration you take the opportunity not only to pause and look within, but also to consider what it will take to create a world free of genocide.