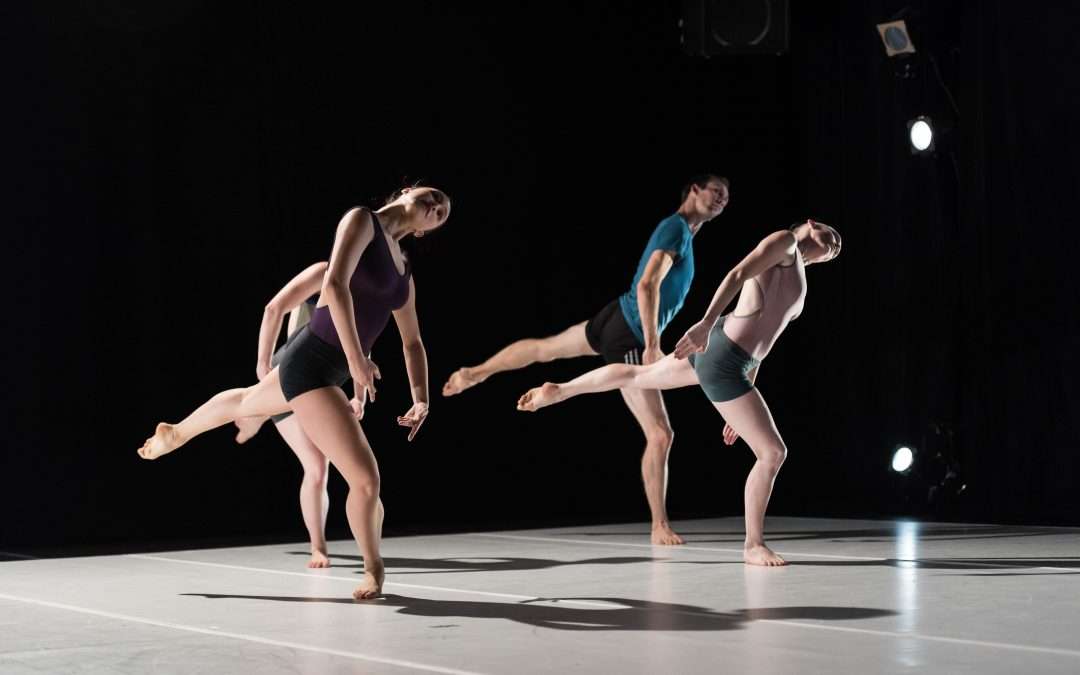 When it comes to watching certain kinds of dance, closer is better.

Choreographer Donald Byrd and the dancers of Spectrum Dance Theater can certainly hold their own on a big stage. But there’s nothing like seeing them in their Madrona studio to register their full impact. When they shake the floor, your seat shakes with them. You can hear their grunts and you can smell their sweat. Best of all, you can register every nuance of their facial expressions as they lose themselves – and find themselves – in the extraordinary worlds that Byrd creates for them.

This is dance in Scent-o-Vision and Sensurround.

Byrd’s latest series of works, collectively titled “Occurrence,” takes its cue from Merce Cunningham’s “Events” which mixed and matched excerpts from existing works, finding new connections between and putting key passages in new contexts. The second installment of Byrd’s “Occurrence,” which got a showing on Nov. 10 and repeats Nov. 11, takes segments of three existing pieces – “Black Man Weeping,” “The Minstrel Show” and “Geekspeak (or just another dance with dancers wearing sock for no apparent reason)” – and fuses them with a sizable chunk of new work.

The effect is a little like taking a flying tour of Byrd’s mind. You sample his dry wit in “Geekspeak.” You see him at his most intuitive and abstract in a hypnotic expanse of new work, in which solos, duets, trios and quartets keep spinning off each other in kaleidoscopic succession. An excerpt from “Black Man Weeping” offers a stark, searching drama about (racial) alienation from the crowd.

Byrd’s latest crew of dancers – including four newcomers – pull off their marvels with an ease that lets them inhabit their performances completely.

Alexander Pham has the deadpan aplomb of Buster Keaton in “Geekspeak” (for three dancers). His silky ripples, dagger-sharp thrusts and whiplash leg-lifts are a droll, intricate commentary on Pamela Z’s spoken-word sound-collage, which parses the distinction between “geeks” and “nerds.”

Jaclyn Wheatley – whose solo kicks off the changing configurations of Byrd’s unnamed new work – has become a true star of the company. Her speed, precision and angular elasticity are captivating.

And Robert Moore, as the odd man out in “Black Man Weeping,” is both astonishing in his technique and heartbreaking in his vulnerability. Spectrum has a long history of dancers blending physical pyrotechnics with harrowing actors’ instincts. Moore delivers that combo as well as anyone who’s come before him.

Byrd’s own stroke of genius here is to take the closing passage from “The Minstrel Show” – a choral stare-down-the-audience number set to a Scott Joplin rag – and make it the coda to his “Black Man Weeping” excerpt. This chorus, led by steely-eyed Madison Oliver, has a Weimar-era cabaret flavor to it. With a political sting and cynicism, it takes a seething glee in exposing nightmare realities.

Then there’s Spectrum’s partner-work. The trust and intimacy these duos and trios bring to their fleeting lifts and acrobatic balances is a continual thrill. The pairings of Pham with Wheatley, Oliver with Marte Osiris Madera, Paul Giarratano with Blair Jolly Elliot, and Nia-Amina Minor with Marco Farroni all deliver riveting goods.

Byrd’s use of tight choral movement to offset solo or duet action is fascinating too. A background trio or quartet of performers often provides a steady, flexing motor-rhythm that serves as compelling foil to the dreamy or intense action of the dancers in the foreground.

Even though this incarnation of “Occurrence” draws from markedly different veins of Byrd’s oeuvre, Byrd has devised a way to give it a propulsive, shapeshifting momentum that keeps you hanging on every next move. The Nov. 17/18 “Occurrence” will take different ingredients and make an entirely new brew of them. I can’t wait.