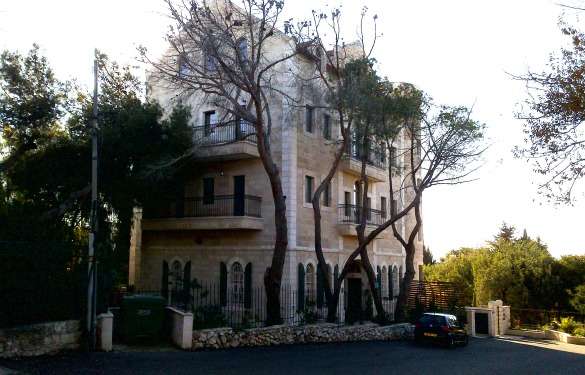 A building near my apartment in Abu Tor, a mixed Arab and Jewish neighborhood in Jerusalem.

Let me begin by saying I love Jerusalem. I love all its contradictions, political messiness, convergences and colliding of religions, cultures and ethnicities, as well as the resultant tensions. It is my kind of joint! To me it is not a city it is a ‘place’. A place that feels as if it is not bound by space-time but rather one that often feels outside time, since time here can appear as layers or to collapse in on itself. I must admit that while here I often don’t know what ‘now’ is. It is like being in a rubix cube of time with its parts constantly rotating at various speeds and its dizzying permutations trying to settle on ‘a now.’ 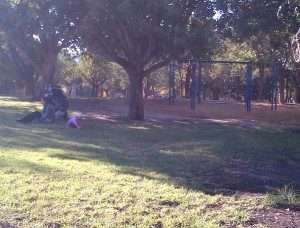 The public park behind my apartment in the in Abu Tor neighborhood.

Last Sunday at the Academy’s weekly salon and dinner, I said that Jerusalem reminded me of New York. The woman seated next to me tensed, sat up straight in her chair and said, “That’s not possible!” To her thinking, Tel Aviv was more like New York – cosmopolitan, rich in culture, and most importantly to her, tolerant. But tolerant of what, I wondered? To my observations Tel Aviv is practically militant in its secular jewishness. Almost everyone is Jewish and almost every Jew is secular. So there isn’t much opportunity to test one’s tolerance in a practical sense. It is all concept of tolerance; there is very little opportunity to practice tolerance. There is a sameness to Tel Aviv society [and in that sameness I feel ill at ease]. I think that the sameness provides comfort to the inhabitants while underscoring the ‘otherness’ of outsiders. When I was there four years ago often I noticed that my presences seem to startle people. It seemed as if my apparently obvious Gentileness caused them to be momentarily shaken out of the comfort of their jewishness or the sameness they are used to. Their faces seem to say, “Where am I?” There would be a quick shake, a slight shiver in their bodies as if shaking something off, they would recover and be on their way as if I did not exist or that the encounter did not happen. They returned to the safety of the bubble that is Tel Aviv. Clearly, one of these did not fit and that was I.  Nothing of the sort happens in Jerusalem.

Let’s be clear here, I am not suggesting that Jerusalemites are tolerant – they just seem to tolerate you, albeit sometimes with lots of attitude, shaded hostility, or feigned indifference (depending on which ‘Jerusalem’ you are in, East, West, Old City, a ultra-Orthodox neighborhood, etc.). Which to me seems very New Yorkish. Just taking a ride on the new, currently free and often-crowded light rail that is jammed with every version of a Jerusalemite you can imagine demonstrates the New York likeness of Jerusalem. It is in those short moments when diverse peoples are forced to tolerate each other for the duration of their ride, when their tribal identity and humalah are momentarily subjugated to, quoting my friend Tommy DeFrantz, “people doing their thing as best they can” that I feel as though I most fit in.

Here are three dictionary definitions of assimilation (courtesy of Encarta World English Dictionary) 1. The process of becoming part of, or more like, something greater; 2. The process in which one group takes on the cultural and other traits of a larger group; and 3. The integration of new knowledge or information with what is already known. They all speak to a smaller or single ‘thing’ being integrated into a larger or group thing. But this says nothing about the mindset of an individual who is assimilated. In the Star Trek universe/ mythology The Borg, a pseudo-race of cybernetic organisms that share a single mind and a single purpose – to assimilate technology and individuals into its ‘collective,’ “We are the Borg. Existence, as you know it, is over. We will add your biological and technological distinctiveness to our own. Resistance is futile.”  This is the ultimate act of fitting in (and a frightening one as well). 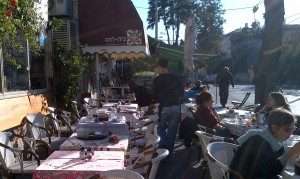 All of this fitting in stuff came up because while sitting in one of my favorite cafes here, Kalo, on Beit Lechem Road, the leafy and peaceful thoroughfare that cuts through the heart of the old stone villas and gardens of Baka, I noticed how at ease I felt. Perhaps more so than I ever feel when in most American cities, except perhaps New York, Los Angeles, Austin, and Seattle. And certainly more than in any foreign city I can think of.

Perhaps to fit in is simply a personal assertion – I fit in because I say I do and I am at ease in this place. This has nothing to do with how you are perceived from the outside but rather how it occurs for you. Ultimately, I am only concerned about how I feel not how others see or think of me. There is a 12 Step adage that says, “What other people think of me is none of my business.” So, In Jerusalem I find myself fitting in because I say I do and it doesn’t matter if others think I do or not. I also want to fit in – I desire it. I am at ease and surprisingly have a kind of peace of mind here.  But also Jerusalem, like the Borg, demands that you submit and resistance to this place is indeed futile. 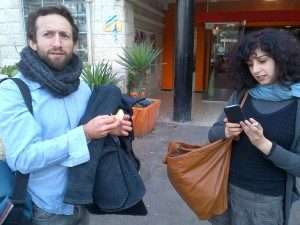 Sometimes I wonder about my project here – To explore the Palestinian-Israeli conflict as a perpetual machine of failed attempts and disillusionment. The political implications are annoying, artistic scope limiting, and personally painful. It’s like beating your head against a wall knowing that the wall will remain standing but you continue to do it anyway. (What is that definition of insanity – doing the same thing and expecting different results?) Pursuing this project is an act of insanity and I have been here before, yet I persist.

I have had three workshop/auditions for dancers. The first had five women – four Jewish, one Arab; the second I had two men, both Jewish; the third, three of the women from the first session did not return including the Arab woman but a different Arab woman showed up. During all sessions, people wanted to talk – a lot. At first I encouraged this but by the end of session three I was sick of talking. To paraphrase Faye Dunaway in the film Mommie Dearest – No more talking!

I find myself in a kind of Chekhovian melancholy while working on A Chekhovian Resolution, my work from 2008 that delved into “hamatzav” or “the situation” (that’s how the Israeli/Palestinian conflict is often refer to by Israelis). In some way I feel like a character in Chekhov’s Three Sisters, invoking Moscow over and over and over again – “To Moscow, I beg you!” But the ‘Moscow’ they long for does not exist, will not make life richer or fuller and they know it.  Perhaps what I long for here in Jerusalem, (and the unattainable Jerusalem that people here long for), is impossible and I also know that… Maybe I’ve just found the title of my piece Moscow/Jerusalem.

I’ve seen quite a bit of dance since I have been in Jerusalem. Most of it has been by young emerging artists such as Iris Erez, Maya Brinner, Maya Weinberg to name a few. It has also not been what I expected. What Israel exports to the world often has been the big theatrical and full throttled dance of Batsheva and the work of Ohad Naharin, Isik Galili, and Emanuael Gat. The work from these emerging artists, however, for the most part is the opposite. It often appears small in scale, myopic, bleak, very cerebral, minimal in its movement value, and unfathomably deep. There is a sameness about much of it, much like the Bauhaus International style of the buildings in Tel Aviv the city where I believe most of this dance is originating. At a recent performance I attended, it occurred to me that if I didn’t know better I would have thought that it was all the work of a single artist rather than three different choreographers. This was very disappointing especially since one of the choreographers presenting a new piece that I was excited to see was Iris Erez whose Homesick I had admired in an earlier performance. 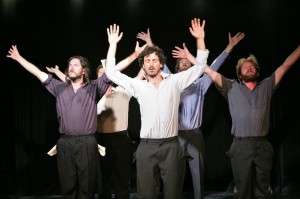 However, there was one performance I attended that was truly surprising and definitely not disappointing, Ka’et Ensemble. This is a group of orthodox Jewish male non-professional dancers. They brought a level of honesty and earnestness to their performance that I rarely see on the professional dance stage. There was neither a hint of the professional dance post-modern irony, nor 21st Century apocalyptic jitters, nor amateurish smiley cutesiness. It was spirited, spiritual and full of a radiant joy, as only true believers seem to posses, (religious and artistic). And their joy was contagious. I caught a glimpse of a few of the ‘dancers’ their faces washed in the after glow of their performance speaking with friends and relatives after the performance, and their joy was projected on to and reflected back on the faces of those who had experienced the performance and to whom they were now speaking. Their joy was not a ‘look I’m dancing’ joy or the community center’s dance troupe’s proudness (maybe a tad) but something much deeper and profound. It was transcendent with a touch of the holy, the spirit elevated. It was beautiful!

This is a kind of religious dance, I think (but it is also serious and rigorous choreography that any contemporary dance company could conceivably perform). It seems to me that what Ronen Izhaki (choreographer), his music/sound collaborator Emmanuel Witzthum along with these men has done is to create a form of ‘charismatic’ modern orthodox body based prayer, especially with the piece Highway # 1.

I use the term charismatic (this maybe is a mistake and might open me up to all sorts of attack); perhaps, Jewish ecstatic body prayer might be a better term. I say this because the outward display of passion in their work brings to mind, while clearly not the same thing, those in charismatic Christianity. Ka’et (a Hebrew acronym that means “timely”) is to my thinking especially ‘timely’ at this particular period in Jerusalem’s artistic and cultural life given the exodus of young thinkers and artists to Tel Aviv. While Tel Aviv, a modern secular Mediterranean city clearly looks to Europe and the West for it aesthetic affinities, Jerusalem a venerated religious site and a contentious political capital is Middle Eastern in its sensibilities. One wonders then at how its art should be or how it should speak here. I am reminded of Dvořák’s (the 19th Century Czech composer famously know for his Symphony No. 9 in E Minor “From the New World”) newspaper articles reflecting on the state of American music. He conjectured that African-American and Native American music should be used as a foundation for the growth of American music and only through the ‘native music’ would Americans find their own national style of music. In Jerusalem the ‘native musics’ are religion and politics so it is only fitting that the dance here at its most authentic should be manifest with religious and/or political signifiers. Ka’et is indeed timely, truly of this place Jerusalem and that for me is why it succeeds.