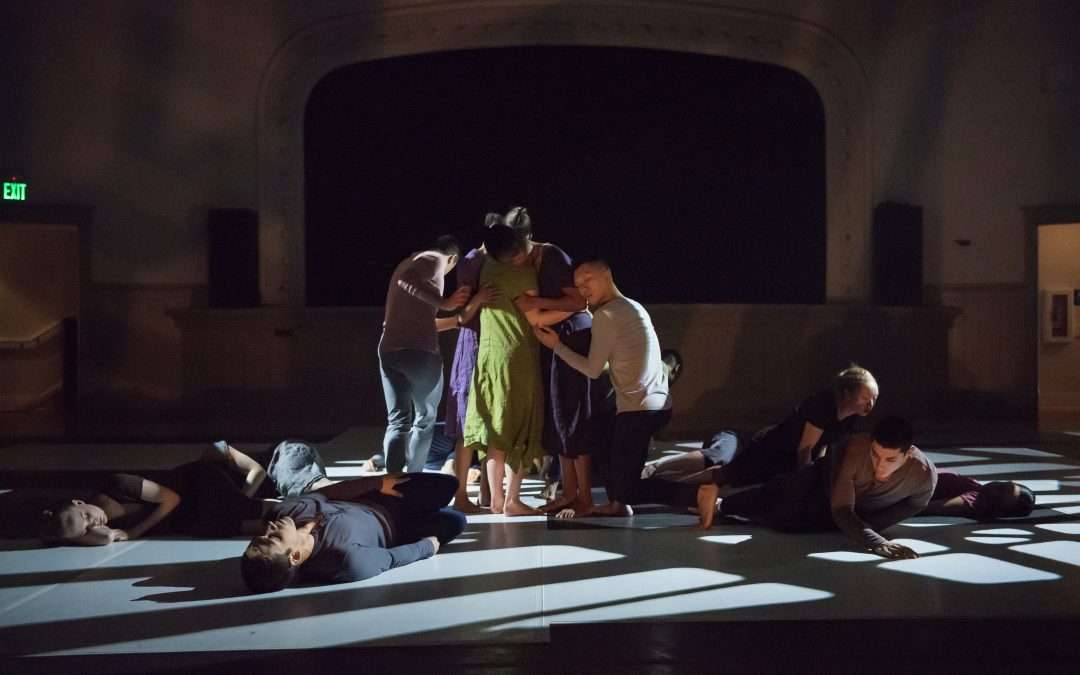 Donald Byrd’s “H.R. 3244,” which Spectrum Dance Theater premiered on Thursday night, opens with four sets of dancers – a quintet, a quartet, two trios – taking their places on the stage before they combine into one massive huddle.

There they tremble, arms wrapped around each other, heads resting on each other’s shoulders, before they fall away from the group like petals from a gigantic flower.

It’s a striking image – one that recurs in various forms throughout the 75-minute show. Plenty of extraordinary interactions between performers occur at every stage of the action, as they shift back and forth in ever-changing combinations between moments of weakness and strength. But the huddle is their fallback position – their sanctuary, their refuge.

That shivering group embrace is abstract enough to be open to interpretation. But Byrd’s starting point was a Congressional bill, passed in 2000, that attempted to curb human trafficking.

We hear much of the text of H.R. 3244 in voiceover in the show. We also hear a sound-collage of female voices (artfully assembled by Robertson Witmer) detailing how they found themselves trapped in some form of sex slavery. The richest sound component, however, is a live performance of selected J.S. Bach sonatas and partitas for solo violin, ably played by Aeolus Quartet violinist Nicholas Tavani.

In his program notes, Byrd remarks, “‘H.R. 3244’ is not about human trafficking but rather is my emotional response to human trafficking.” He adds: “The piece is abstract but informed by the reality of this modern slavery.” It’s his way, he says, of trying to wrap his mind around a baffling evil in the world.

Only one passage in “H.R. 3244” overtly addresses the piece’s subject matter: a deftly performed duet by Andrew Pontius and Emily Pihjala. Pontius’s canny stillness, as Pihjala runs wide circles around him, gradually lures her into his embrace. He both supports and controls her as their limbs dovetail intricately together. Sometimes she’s automaton-stiff in his arms. At other moments, she breaks free – only to have him pull her back in with nothing more than a steady look.

Other passages feature a soloist moving in more ambiguous call-and-answer with a small group of dancers. Nia-Amina Minor brings a captivating gossamer clarity to her interactions with her trio of support performers. She’s not quite victim, not quite victor – although she is odd dancer out – as she utilizes an eclectic array of shuffles, shifting stances, sharp extensions and handclaps to evoke a wily, dodging spirit of persistence.

Herd mentality is part of the picture too. In several instances, a soloist breaks off from a loping group of arm-linked dancers and bursts into a sprint, only to stumble, collapse and then slowly rise to join the herd again.

Finally, there’s a female trio – Blair Jolly Elliot, Madison Oliver, Jaclyn Wheatley – who serve as fierce graces or muses who seem both to portray and to comment on a harsh threat-filled world.

“H.R. 3244” fluctuates between breakneck formality (Byrd gets his dancers moving fast without sacrifice of precision or nuance) and quiet, tender moments of care and consolation. As the piece progresses, the violin music takes dominance over the voiceovers. The action grows more introspective as the dancers pull you into their world of searching struggle and profound connection.

From that deep sequestered place, they re-emerge for a final scene of full-ensemble, drill-team ferocity – floor-shaking foot-stomps and fist-pounding, 360-degree stiff-bodied turns in the air, unison breaths as sharp as percussion – as if to protest, “This should not be.”

Then, with their final re-convergence into a trembling mass of bodies, they seem to say: “But it’s what we’re stuck with – so let’s look out for each other with all our might.”