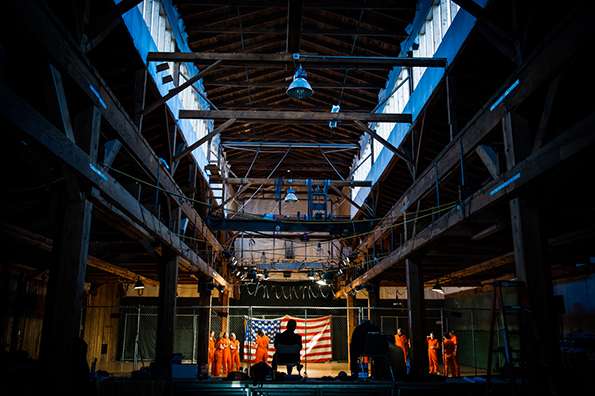 “At 7:30 AM on the morning of September 11, 2001, I sat in my apartment four blocks from The World Trade Center optimistically preparing for a fundraiser … At about 8:45 AM I stared in stunned silence as an airplane slammed into the North Tower of The World Trade Center… By 10:00 AM the life I knew had vanished. I was emotionally and psychologically devastated, displaced from my home, and I felt like a refugee.” – An entry from my diary/Donald Byrd

In 2003, “I felt like a refugee”, was my starting point for A CRUEL NEW WORLD/the new normal, my first new work made in my new hometown of Seattle and in my new capacity as artistic director of Spectrum Dance Theater. But it was not my only source of inspiration. Surprisingly, on my arrival at Spectrum and in Seattle, I had been greeted with unexpected hostilities from various camps at Spectrum and around town that stunned and dismayed me. This ‘new world’ I had entered seemed hostile and often cruel. I felt isolated and alone. I responded with not only focused determination to survive and to succeed but also with anger. This became my norm –to meet the hostilities of this new world with aggressive anger and rage.

A CRUEL NEW WORLD/the new normal was to be a dystopic vision of life in America post-9/11. This was to be a vision of America comprised of vast refugee camps of displaced citizens, the result of ongoing terrorist attacks on our homeland. This world was to be one inflamed with cruelty, fueled by dislocation, uncertainty, fear and anger. It was also to be a personal critique of my new life on the outer edges of America – a dark and hostile place. And like an emotionally and psychologically scarred version of Shakespeare’s Miranda from The Tempest, I stared out onto a brave new world not with wonderment and awe but with despair.

As artistic director I had another concern – to develop the company dancers. This growth needed to begin with the technical. The kind of dancers I has grown accustomed to working with in New York were not only highly skilled technicians but often were in possession of exceptional physical capabilities. Though the Spectrum dancers at the time were good technically and possessed immense charm, spirit, and personality, they were not, in many ways ideally suited to the kind of work that I wanted to create. However, I was hopeful that they would meet the challenge and achieve what I was after. Also, the company had for sometime been branded as a ‘jazz dance’ company, thus, the repertory and the dancers’ approach to movement was very much in that style. When I began work with them on A CRUEL NEW WORLD/the new normal, my aim was to provide not only technical and artistic challenges, but also to create a movement vocabulary that drew from their jazz dance experiences and to infuse it with contemporary dance values and sensibilities. In other words I wanted to avoid some of the clichés of jazz dance (jazz hands, big smiles) yet embrace its strengths (attack, generosity and a performative veneer); while adding to that the purposefulness and high concepts often associated with contemporary dance work. My goal was to ease the company towards a Byrd aesthetic. A CRUEL NEW WORLD/the new normal was to be a bridge between the old Spectrum and what Spectrum would become.

10 years after it premiere on April 3, 2003, A CRUEL NEW WORLD/the new normal in this revised version is in many ways the same yet there are some marked differences. What remains are the movement and the vocabulary. Except for a few additions and trims here and there, done for clarity sake, the movement is as it was 10 years ago, as is the sequencing of the sections. However, it is different in its context, focus, and shape.

In its original iteration the world of the piece, its context, was that of displaced people in a citizen refugee camp. However, in this version they are no longer citizen refugees but rather citizen detainees, Americans held in a GITMO like detention camp. They are interned not because they are enemy combatants but rather because the ‘war on terror’ has curtailed personal liberties and their beliefs makes them suspect. This is an extreme vision of a future America where national security trumps civil liberties and all democratic processes are sacrificed in the name of the security of the state.

In addition, whereas in the 2003 version, the people of the piece were generalized and operated on a symbolic or metaphoric level (representations), here in the revised version, they are more specific. In fact, we can think of them as characters with very specific ways of being and behaviors. We experience the world these people inhabit and not just observe it. We see it focused through their eyes.

Finally, in keeping with my current practice of approaching revivals of my older works directorially as oppose to re-authoring, A CRUEL NEW WORLD/the new normal has undergone a directorial process that clarifies and shapes. There is now something more akin to a classical dramatic shape to the piece, especially emotionally, than there was before. Yet, there has been some re-authoring, primarily in the altering of the spoken text. 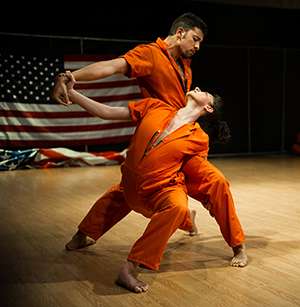